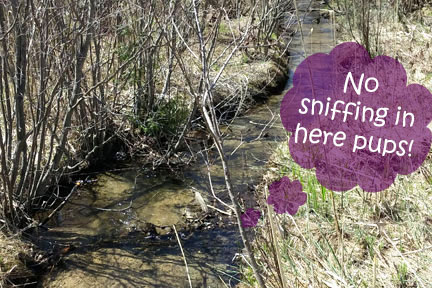 Where I live in Canada, snow covers the ground all winter and spring is the first time we see the earth for six months. When the snow melts, it’s a great time for pet sitters to remember to take stock in safety measures for themselves and the dogs they’re with, too.

Dogs LOVE springtime and it’s hard to keep their noses from the ground with all the delicious aromas out there, but be aware! The smells aren’t all good and what’s left from beneath the snow can make your dog sick!

Do you live in a warm climate? By the water? Not everyone experiences a sharp change in seasons as we do, but pet sitters everywhere know the potential for problems pop up without warning. Ocean tides, lake debris, desert heat, and torrential rain storms bring their own set of tantalizing smells for pups. Plus – dogs have a natural gift for unearthing exactly the wrong thing to sniff or chew.

Let’s have a look at 12 Hazardous Conditions for Exploring Dogs:

Places to Keep Your Dog from Investigating

If your head is in the clouds during your walks, you could be putting your dog – and yourself – in danger of illness or a nasty encounter. We have to keep our eyes watching a few steps ahead of the dog at any time of the year. It’s why your client hired you…as a professional and not just the kid down the street…after all!