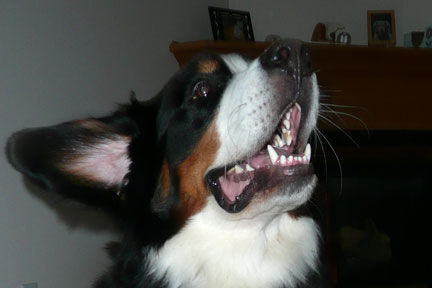 February is Pet Dental Health Month so let’s talk about how to keep a dog or cat’s teeth clean. Even though as a pet sitter, you probably won’t be called upon to brush the teeth of your client’s animals, it does sometimes come up during vacation pet sits and it’s surprising how often we’re called upon to give advice.

We often see older dogs with yellowish teeth, swollen gums, or caked-on debris around the gum line. This isn’t normal for an animal. It’s usually the result of people being ignorant of proper dental  hygiene for dogs and cats. Swollen red gums are extremely painful no matter how the animal tries to hide it. Just think how much a little boil or cut on our gums hurts. Then try eating a bowl of kibble or a dog biscuit.

But poor hygiene isn’t just a problem for the gums. It can progress until the teeth become loose and additionally the bacteria in infected gums can travel through the bloodstream to affect the organs such as the heart, kidneys, and lungs.

I was a dental assistant for 10 years and saw the results of poor dental care in humans. It’s just the same for animals – except as people we can complain and eventually reach for treatment.

The other difference is, according to the American Veterinary Medical Association, 80% of dogs and 70% of cats have dental disease by the time they are three years old. This means the average pet could have pain in his mouth for ten years or longer!

I’ve heard of infection moving up into the sinus, where the top roots of a tooth just touch, and which lays next to the brain – and the infection spreading to it.

If this sounds horrid and impossible…it is horrible. But it is possible and many dogs become very ill and can die just because their humans will not care for their teeth.

What do You do as a Pet Sitter?

As a pet sitter, you’re in a very tricky spot because the animal is not yours…yet you can see a potential time bomb happening. And unfortunately, very few people will believe you if you point out the potential consequences.

In the early stages – when home care such as brushing, treats, and toys can make a difference, you might suggest them because you, “noticed some plaque build up” that could lead to a problem down the road.”

If the animal has gingivitis or worse already, and might be having trouble chewing, the client might already realize they’re in for a huge vet bill. You might need to gently mention that you are concerned and perhaps they don’t realize the discomfort and potential serious problems that can happen.

In the next part of this article, we’ll look at how to brush a cat and dog’s teeth and some healthy ways to keep the plaque from staying on the teeth.

Until then…have fun out there!