Jack Russell Terrier – The Devil’s in the Eyes 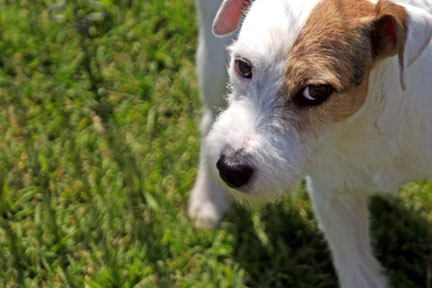 January 30, 2015 – Sugar and spice one minute and mad dog the next…such are a few of the Jack Russell Terriers we’ve known and loved. Watch for the devil in their eyes!

You’ve seen them on television and fallen for their lovable charm and crazy antics. They can leap tall buildings in a single bound (really…it’s not just a saying…even when they’re 15 years old!) They’re hilarious to play with, grinning and (I’m certain) laughing at the game, whatever it is you cook-up for them. And of course they’re lightning fast runners. If I can ever post a photo of one on the run…I’ll paste it here…or in a post of its own. We’re mesmerized by the speed that one of dogs we know runs the backyard snow maze when he needs to vent. They’re truly awesome (in the real sense of the word) in agility settings. They’re made for it!

And venting…is what they need to do…a few times a day. Jack Russells are smart but willful and psych themselves into a powder keg that explodes when you least expect it. Don’t be surprised if you get a tummy to rub one moment and suddenly the teeth come out in a snarl the next. At the speed they have in them, they could bite as fast as a rattler so steer clear.

Fortunately – they’re super smart and understand the world around them…including themselves. We’ve watched Jacks take on a Coon Hound one moment and then hang his head the next because he knew it was wrong. Or he’d run under the bed when the crazies started to build to keep away from everyone. As long as you stayed back while the snarling lasted, he’d be fine and come out looking for a cuddle a half hour later.

Which is another lovely thing about Jack Russells. They can bounce onto your lap and take-in the world while you hug them. When they’re happy, they have smiles like sunshine breaking through a cloud. It lights the heart.

Even though some websites I’ve visited say older kids do well with them but you have to watch them with younger children…I’d be wary of them with kids of any age and anyone nervous of dogs in general. Again…I’m basing this on the ones I know…and as much as I will bring my face down to them for a snuggle several times a day…I know which times are safe.

We love the Jack Russells we look after – but we have taken the time to learn their individual personalities. Some are more daring, some are finicky, some have more of a sense of humor. All of them are willful and have their own mind. And all love attention and will show off whenever they can. They need rules and guidelines (gentle but firm) and they seem to understand why. [We look after one who will run away and he waits patiently for his leash while the other dogs charge out the door but stay close on their large property. He feels safer when he’s connected to us.]

I wouldn’t give up the ones we know for anything. They’re little diamonds in the rough and we love being there to guide them.

Today is the 30th of January in our 365 days of pet sitting. It was cold and clear…really cold! We had only five dog visits plus our boarders but no one wanted to walk far in the -30 C wind chill. Play time was close to home and there were hugs aplenty to warm up after everyone was toweled-down inside.