Routines for Pets – While at Home or Boarding 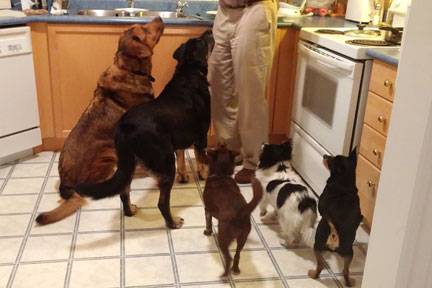 January 24, 2015 – We see lots of dogs and follow many routines for them in the course of a week. If we’re looking after them at their home while their family is away, or if they are boarding with us…those routines become even more important for us to know.

During your meet-and-greet visit, one of the things that clients often mention – and pet sitters don’t often take full advantage of recording at the time – are the dog’s routines. The reason is, with a full schedule of visits, we can’t always follow routines as closely as the client would like, but we do our very best to get all the other details right. Yes…we get the dog out before breakfast at 7:30 (maybe not 6:45 as he’s used to), we boil water in the kettle not the microwave as they request to put on the pup’s kibble…then drain it off (or make it soupy), we add this, mix that, and feed beside the fridge not too close to the corner of the counter or their other dog will stick his nose in too. Then back out for his walk (don’t walk before eating they might say.)

Did you see the problem? We can do all the details they’ve asked for, but perhaps we don’t make our first call before 7:30 (or 7:00 or whatever you wish). Or perhaps we have three vacations to cover during March Break and this dog is logically along our route to be seen at 7:30. Some routines must be bent.

How Important are Routines to Pets?

From experience and from what I’ve researched – not being a behaviorist at all – I’ve learned that routines provide a structure to the animals’ lives. In a world where they ultimately have no control over their environment, a routine gives them something familiar to cling to. They find comfort in it.

When routines are broken, the animals become stressed – which can lead to illness, accidents indoors, nervousness or irritability, itchy skin reactions and other things. They’re often aware of this themselves and try hard not to let you know. One dog we look after winds up to a snapping point if he doesn’t have enough exercise. He isn’t in a family situation where he has the opportunity to really run, so when we can, we bring him over and let him go crazy in our yard. When he does get pent up, he’ll give everyone a warning growl that escalates as the evening wears on and finally there’s either a fight or he hides himself beneath the bed until he calms down. Then he comes out smiling again.

Another large dog we love to look after is a bundle of nerves beneath a calm exterior. He’s a worrier. We can see it in him. While he usually can take just about anything any other dog or the world throws at him, sometimes we can see when he just needs to let out his frustration. He has a collection of stuffed toys that take the brunt of this – and he nearly always has one close by. We wouldn’t dream of taking him anywhere without having one or two in the car. I’m forever sewing them things up because it doesn’t take long to shred them. But if you went over to give him a pat in the middle of the massacre, he’d roll on his back and grumble in contented bliss!

What Are the Most Prominent Routines to Watch For?

When is it Okay to Break the Routine?

When you look at the reason we follow a routine, to alleviate stress on the animal by giving him structure, then it seems logical that as long as we give him structure he can count on, he’ll be able to adapt. You might get to the house at 7:45 instead of 7:00. You might not be able to do his usual one hour walk at 11:45 but you give him a half hour walk at 12:30 and you make sure he has time to do all his business without rushing and he can sniff his favorite spots and enjoy a treat when he gets back. You’re providing him with what he needs to feel comfortable and not have stress.

I can think of five rescues who’ve come through a variety of life situations. You’d think they would need sound routines more than any dogs to give them security, but in every case, all they needed was a human to count on…to give them comfort so they would finally be free of stress. Every one was ready to run out to the car without a meal if it meant an adventure. Every one would pack-in a walk if the weather was nasty. They all had routines…as we all do…but they were more interested in seizing the day, now that they had the opportunity. Boredom would be more stressful.

So do your best to follow your client’s routines for their pets, especially when they don’t know you well. But pay more attention to getting to know the animal himself so he can trust you to look after him and ease his mind, even while you’re there looking after his body.

Today was day 24 in our 365-day series. It’s Saturday so we don’t have our regulars but the family of multi-dogs is here for the night. We’ve been booking-in boarding and vacation pet sits for the next few weeks. People are starting to think about winter holidays.