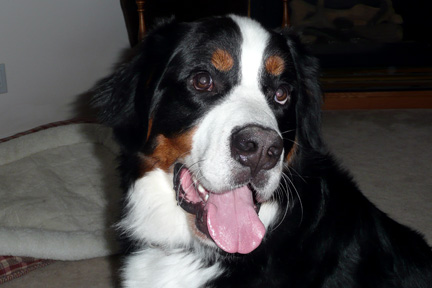 January 19, 2015 – Today on Fun with Breeds we’re having a look at one of our favorites…Bernese Mountain Dogs.

In our posts on breeds, we lean less on the standard information and more on what we’ve found out in the field. This is a very small cross-section…but each dog is eerily similar…so I think we’re on to something! And it’s all for a little fun.

The Bernese we know from our business and friends include one large teenage male (starting as a puppy with us), one younger female, one very old female, and puppy female.

Our first impression of a Bernese Mountain dog was…”Wow…they’re not as big as my research says, and much more quiet.” (The elderly female.) By coincidence, a few days later we met the now teenaged male we look after who was then a puppy and already just shy of the same height as the female. So much for being mid-sized! “Wow…that one’s paws are the size of lunch plates already!”

This male pup, let’s call him Jake, was also a bundle of constant energy…I mean constant. No off button. We put this excitement down to him being young.

He was four months when we first met him and he barreled out of his crate to land at my husband’s feet…and peed on them. He pretty much did that at every visit for the first while. My husband got pretty quick at moving his feet out of range. And with that pee out of the way, we had a heck of a time getting him to do another one on the walk.

This brings up the similarities with Golden Retriever’s…they’re both just a little on the stubborn side. Both breeds also like to lean into you if you’re nearby. It gives you a lovely sentimental feeling, like a hug…only with the added problem of needing to brace yourself so you don’t fall over when the Bernese does it.

Both breeds like to sit in front of you for a neck and shoulder massage. During Christmas we had four Goldens and a Flat Coated Retriever (not all at the same time!) stay with us, and every one of them came over to sit on my feet for their massage. Each of the four Goldens I’ve lived with did the same…and the Bernese dogs do too.

Did I mention how BIG the male has grown? He LOVES his neck rubs but when he sits his bony bum on my feet…it hurts! But he doesn’t stay long with that; he can’t sit still and there is so much tummy for him to let you scratch next!

We have plenty of snow in winter and, true to their Swiss background, the Bernese Mountain dog LOVES to walk on it. I mean…while you’re walking along the road, the dog is up walking along the banks at your waist or shoulder height! Even the females love the excitement of a snow bank.

During my reading on Bernese, I read they are sociable with people (check), with other dogs (check…at least from what our clients say. We don’t let dogs in our care interact with other dogs), and with children. This one I’m not sure about. None of the families we know with Bernese have kids but one and she is a teenager. However, my guess is they’d love kids…but only if the child knows the dog. Otherwise she  could be frightened by the dog’s size. (Think of a bear coming at you!)

And my last note on the Bernese is all about working with them. They’re very intelligent. If you tell them no…they can’t sniff that spot, they’ll nonchalantly guide you back in that direction on the way home from the walk, and the next day, and the next day…until the silly human forgets and I get my sniff.

They understand commands…but they won’t necessarily do them. Or they do it once to show you they understand, but no thanks I don’t feel like doing that right now. (Any Golden Retriever families out there nodding your heads in recognition of this one?)

You must show you are the alpha. This doesn’t mean you have to be super strict or cross all the time. You don’t have to train them until they’re afraid to be themselves. But you have to let them know, when you look them in the eye, that, “I really mean it. Not. A. Game. This. Time.” It’s vitally important that you develop this relationship, even as their pet sitter, because these guys are big, and they’re strong, and even for someone my husband’s size over six feet tall, a Bernese can be unwieldy. So ground rules are important.

If you treat your Bernese Mountain Dog with respect and a little give-and-take…if you’re not always angry because he bounds around the house knocking things over and you don’t care that he can totally soak you with a slobbery chin on your lap after a drink, then he’ll consider you his buddy and he’ll do anything to make you happy.

We love all the Bernese we know and the ones we care for…and by their reactions to us during their times with us, I think they love us too. Sometimes they’re a bit big to handle when they get all giggly…but they do it all with a big grin and it fills the whole house with happiness.

This is day 19 in the year and today I was at the office and Les had five lunchtime visits – one with a sandwich-stealing Newfoundlander. Even when a dog is so polite and well trained that he won’t touch your food – ever – you think, they have one of those moments. And Les had to buy lunch.